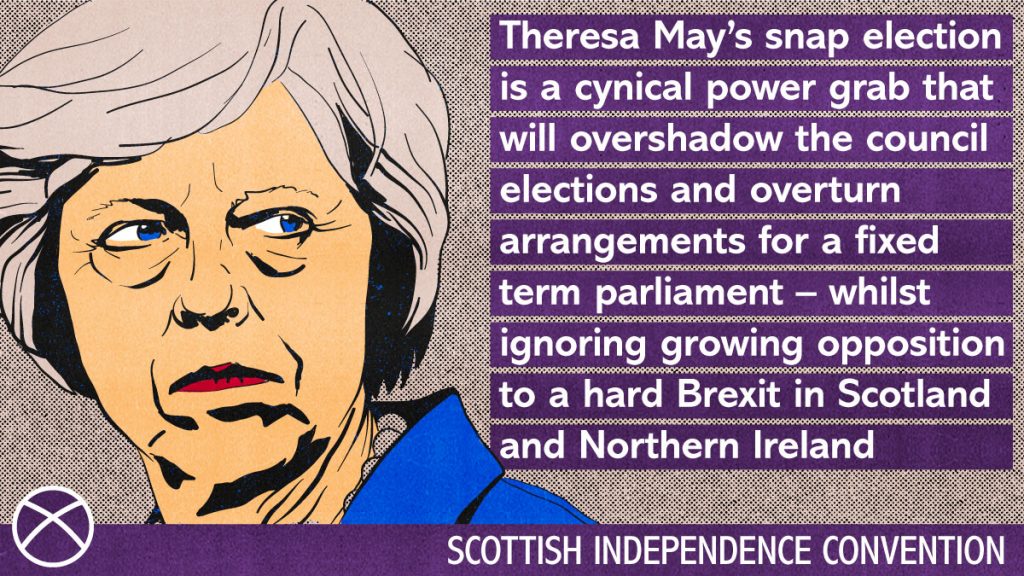 The Scottish Independence Convention (SIC) condemns Theresa May’s snap election as a cynical power grab that will overshadow the council elections and overturn arrangements for a fixed term parliament whilst ignoring growing opposition to a hard Brexit in Scotland and Northern Ireland — two nations that voted to remain inside the EU in last year’s referendum.

If the Prime Minister gets a mandate from English voters on June 8th, she can proceed as she likes with Brexit for the whole UK and Scotland can wave goodbye to any last chance for a differentiated Brexit deal. The only power Scots have in this situation is to ensure all 59 Scottish MPs are returned with an explicit mandate to hold a second independence referendum once the shape of the Brexit deal is known and understood.

“Once again Scots are being dragged into a Westminster dog-fight that is not of our making and doesn’t fit Scottish political priorities. But members of the SIC are ready to mobilise all networks and members to ensure this election creates the opportunity to show Westminster that Scots insist on the right to consider independence again in light of the vast constitutional change set in train by Brexit and the explicit commitments we hope the SNP and Greens will make in their manifestos. As Scotland’s First Minister has repeatedly said that second referendum vote should not happen now but once the shape of the Brexit deal is clear.”

“For every Scot who wants to stay in Europe and have the option of a second independence referendum, this snap election must mean the return of an independence supporting MP in every Scottish seat. Scots must also have an input into the Brexit debate because Theresa May approval ratings are like a mirror image – positive and negative on either side of the border. We call on broadcast media to reflect that political reality in the next weeks of the election campaign. Victory for the Conservatives means the prospect of Tory control at Westminster for the next decade or even the next 20 years as Theresa May cashes in on Labour’s weakness. That will change the perspective of many Scots and the SIC believes we must have the same chance to reassess our political priorities that Theresa May has just grabbed for herself.”

“Is anyone surprised to discover that now is not the time for Scotland, but now is always the time for London? We are staring at a future of Total Tory Britain and the only way out for Scotland is independence.”