Voices for Scotland: launch of a new civic organisation to engage voters on independence

By: scotconv
In: Uncategorized
With: 0 Comments 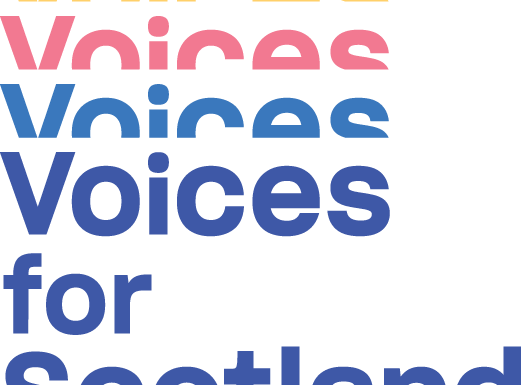 Voices for Scotland, a new non-party, civic organisation campaigning for Scottish independence, launches today. It has been set up by the Scottish Independence Convention and is focused on engaging with people who are undecided about independence or are having doubts about their support for the UK.

Its aim is to facilitate big, open conversations about Scotland’s future through discussion and engagement. The organisation is non-political and will seek to engage with people using a different voice – with the aim of listening to what people need to help them become supportive of independence, as well as to persuade them of its merits.

Voices for Scotland will give people from all walks of life the opportunity to tell their stories and have their voices heard about the country they want to live in. There’s particular intent to listen to people who haven’t made up their minds about Scottish independence or who support the union but have had their faith undermined by recent events.

Voices for Scotland must not, and does not, assume it knows what matters to all the people of Scotland and their fears or hopes for the future.  Neither can it assume what sort of country we want to build. We want to act as a catalyst for wider conversations about Scotland’s future, and how we can make our country a better, fairer, happier place to live.

The grassroots organisation has been funded by many, mainly small, donations from members of the public and will be headed by Chris Hegarty who has been appointed as its Coordinator. A small team will be hired to develop and run campaigns, carry out research and to support and facilitate the many grassroots independence organisations across Scotland.

Comments on the launch

“The UK is in the middle of a political crisis and we’re launching because, important as the views of politicians are, there are many more voices in Scotland which need to be heard as we debate our future.

About a third of those voices are definite independence supporters and about a third are definitely not. We’re all about opening conversations with the third of people who are in the middle, who are undecided or are doubting their previous opinions.

Voices for Scotland is about listening to and engaging respectfully and constructively with them, finding out what they need to help them make their decision and hopefully giving them some things to think about which will help them feel more confident about Scotland’s future as an independent country.”

Dave Thompson, Chair of the Board of Voices for Scotland said:

“To win independence, our movement needs to open conversations with people who are unsure about our constitutional future. We need to listen to their fears and hopes for our country. The more we listen, the better we will be able to provide answers, reassurance and build confidence. That’s what Voices for Scotland is all about. We also want to support those already campaigning for independence with materials and resources which will help people to have the most impactful interactions possible.”

“It’s a genuine privilege to be involved in a grassroots organisation that’s all about listening to the aspirations and concerns of the people of Scotland, and especially one that’s committed to having these open conversations in such a respectful way. I look forward to hearing many of those conversations, and to working with such a talented and committed group of people as those involved in Voices for Scotland.”

Linda Somerville, Board Member of Voices for Scotland said:

“The Scottish Independence Convention, from which Voices for Scotland is being born, represents the amazing range and diversity of groups and individuals already committed to independence. There is evident appetite for change across Scotland and the ambition of Voices for Scotland will help to achieve this vision.”

What is the Scottish Independence Convention?

What is Voices for Scotland

Voices for Scotland is a Company Limited by Guarantee registered in Scotland. It is a pro-independence campaign organisation wholly owned by the SIC but independently governed by a Board appointed by the SIC. It is constitutionally non-profit and funded by small donations from thousands of individual independence supporters. It will employ a small team to develop campaigns, carry out research, produce materials, support local groups, work with the media and run events, all with the aim of opening up positive and constructive conversations about Scotland’s constitutional future.

Who are the members of the Independence Convention

The SIC is made up of over 20 groups which together have a membership of over a hundred of thousand people. A full list of groups and affiliates can be found on the Convention website www.theconvention.scot.

Who is on the Board of Voices for Scotland?

More information is available on https://www.voicesforscotland.scot (will be live on 25/04/2019)

Who is Chris Hegarty?

Chris comes to Voices for Scotland from a senior role in the NGO campaigns sector, where he has led teams in delivering policy, campaigns and media for high-profile charities. He has no party political affiliation and has been an active campaigner for independence for many years.

What is different about Voices for Scotland and the existing independence movement?

The Scottish independence movement is a rich and diverse body of organisations and individuals. Voices for Scotland is not replacing or superseding any part of the existing movement but is complementing it by providing a national campaign and research organisation which is wholly focussed on talking to undecided and persuadable voters in Scotland. It aims to do this by speaking without a party political accent and by listening closely – and responding – to what the people we talk to tell us. It will support and facilitate existing campaigns and campaign groups with materials which have the best possible chance of opening up conversations with target voters.

Voices for Scotland is being launched in at a period of unprecedented turmoil and confusion in the UK with trust in Westminster politics at an all-time low and growing fears not only about the immediate future but also about the political system that got us here in the first place. It is important that the voices on how we fix our political system do not only come from politicians but also from wider society. Voices for Scotland aims to bring precisely those voices to the debate with the aim of opening up conversations that might be dampened down by party political cut and thrust.

The rest of the team will now be recruited, the office set up and the first campaigns developed and rolled out. We will also begin another fundraising push to strengthen our campaigning ability.

How can we be contacted?